Mobility in- and outside the EU with the Blue Card EU?

I recently got the inquiry from an Australian Citizen, asking me whether he would be allowed to work in another EU country with the BLUE Card EU, he applied for in Austria.

If you have held an EU Blue Card from a Member State of the EU for at least 18 months you can enter another Member State without a visa for the purpose of highly-qualified employment and apply for the EU Blue Card there within one month. This clearly explains the misunderstanding of many of our clients: Once you got a Blue Card EU in any of the EU countries and you want to move to another country and pick up a job there, you will have to apply for the Blue Card EU in that respective country again. The same applies to the entry of family members (section 39 No. 7 of the Residence Ordinance). Besides, the holder of a Blue Card can spend up to 12 successive months in a non-EU country without losing his residence title. These same regulations are valid for family members, as well.

The Blue Card is an approved EU-wide work permit (Council Directive 2009/50/EC) allowing high-skilled non-EU citizens to work and live in any country within the European Union , excluding Denmark, Ireland and the United Kingdom, which are not subject to the proposal. The term Blue Card was coined by the think tank Bruegel, inspired by the United States' Green Card and making reference to the European Flag which is blue with twelve golden stars.

The Blue Card proposal presented by the European Commission offers a one-track procedure for non-EU citizens as t he Directive on Highly-qualified Persons to apply for a work permit, which would be valid for up to 4 years (2 years in Austria – followed by a RWR Card +), but can be renewed thereafter. Those who are granted a Blue Card will be given a series of rights, such as favourable family reunification rules. The proposal also encourages geographic mobility within the EU, between different member states, for those who have been granted a blue card. Again and to make it distinctively clear: each EU member state has its own immigration law and regulations. The Blue Card system is a harmonized Scheme which all EU member states apply, but always with their own individual immigration law. E.g.: You are not allowed to work in Italy with a Germany Blue Card. You will have to apply for an Italian Permit in this case.

Applicants have to meet the following conditions, in order to be eligible for a Blue Card

Figures on the EU Blue Card 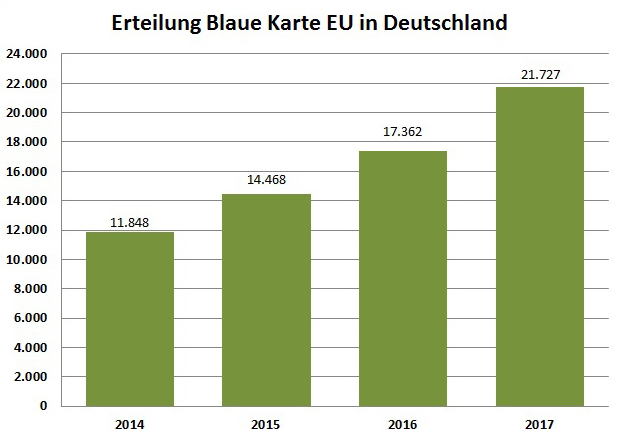 Blue Card is a tool for attracting highly-qualified specialists to the European labour market from third countries. This residence title was introduced in Germany on 1 August 2012. Its legal foundation is provided by section 19a of the Residence Act (Aufenthaltsgesetz – AufenthG).

From Jan. to November 2018 there have been issued 215 Blue Card EU in Austria and 8059 Red-White-Red Cards, which belong to the same High Professional Scheme.

The diagram to the right shows the figures relating to Cards issued to persons entering Germany for the first time, and to those who were already resident in the country, broken down by years.

If you are planning to assign or to hire employees from outside or to EU and you want to make sure you act according Immigration- and Labour Law, contact us here and get help: http://www.moves-consulting.com/kontakt